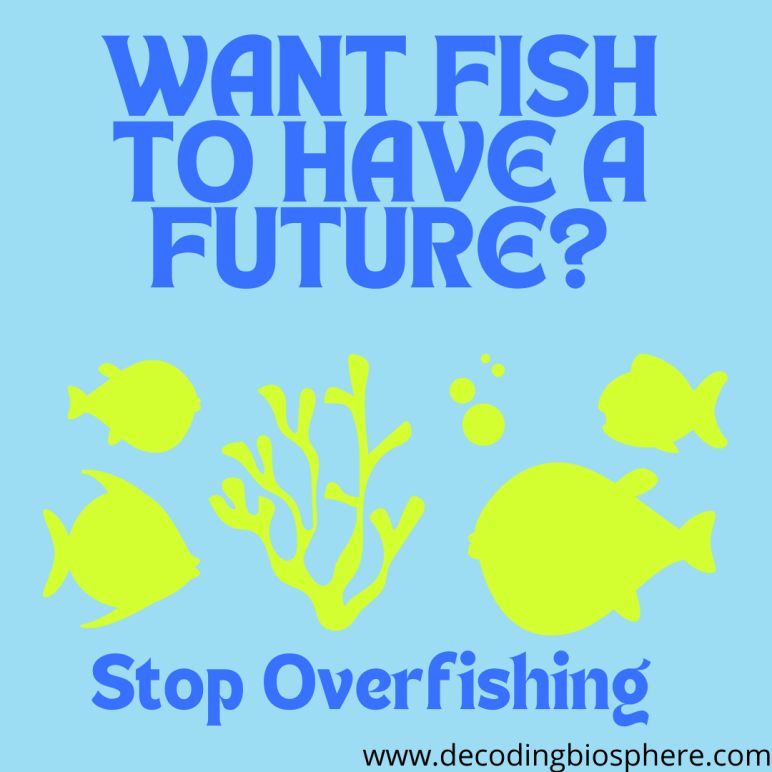 Our planet consists of many ecosystems within it, which should all be in equilibrium to maintain a balance. However, due to certain activities of humans, this equilibrium is disturbed, which is causing devastating effects on the different ecosystems.

Marine ecosystems are the largest of Earth’s aquatic ecosystems and exist in waters that have a high salt content. They consist of a variety of aquatic species living under various depths of the water. Oceans cover almost 70% of the earth’s surface and the overall balance of marine life is essential for the sustainability of life in other ecosystems.

Ocean overfishing simply means catching fish from the sea at rates too high where fish stocks become too depleted to recover. This causes drastic effects on the future of both ocean and land dwellers.

According to WWF, “Overfishing occurs when more fish are caught than the population can replace through natural reproduction. Gathering as many fish as possible may seem like a profitable practice, but overfishing has serious consequences. The results not only affect the balance of life in the oceans, but also the social and economic well-being of the coastal communities who depend on fish for their way of life.”

The fishing industry is one of the oldest industries and a means of living for millions of people living by the coast. However, due to advancements in fishing technology, increasing demands and the urge to gain more profits, overfishing has become a problem today. Let us look at some of the drivers for overfishing.

a. Technology has increased catch efficiency and decreased fish stocks for as long as humans have fished.

d. Difficulties in regulating fishing areas due to lack of resources and tracking activity.

e. In international waters, there are little to no rules regarding fishing practices, which means fishing fleets can bypass areas that do have regulations.

f. Unreported fishing, which is nearly impossible to track.

g. Many countries have subsidies for fishermen which keep their number higher than it needs to be (it is estimated that there are 2 ½ times more fleets than needed).

i. Fishing areas are largely unprotected – only a little over 1.5% of oceans have been declared protective areas, and most of these are still open to fishermen. This means that areas can be harmed or depleted.

j. There is also information failure because fishermen do not know the size of available fish stocks.

Current estimates are that overfishing has impacted over 85% of the world’s fish resources and that most fisheries are fished far beyond their sustainable capacity. While this is resulted to have long-term effects on human consumption, there are also a number of other impacts, such as:

Removal of Essential Predators: Sharks and tuna are particularly susceptible to overfishing, and when they are removed from the areas they live in, this means that sea creatures further down the food chain are negatively impacted. Populations can grow larger, and the role that these larger creatures play –from what they eat to how their bodies decompose –mean potentially fatal effects for ocean ecosystems.

Poor Coral Reef Health: With a larger amount of smaller marine creatures comes greater damage to coral reefs and other elements of the ocean‟s ecosystem. Reefs are essential to ocean life, and once they are harmed, it is hard to repair the damage, if at all.

Growth of Algae: In controlled amounts, algae are essential to helping marine life thrive, but if it is allowed to grow at will, it can impact fish, reefs, and more, leading to serious destruction.

The Threat to Local Food Sources:

There are a number of communities around the world that rely on fish as their primary resource for food. The growth of overfishing has caused a serious threat to these communities, which are often located in developing countries. Without the ability to catch their food, their populations are threatened.

Financial Losses: A lot of communities that rely on fish for food also rely on low-level fishing industries for economic viability. These enterprises, as opposed to large-scale fishing ones, typically do far less damage to their marine life because they are on a much smaller scale. However, when these communities can‟t access food or financial support, they are likely to have trouble in the future.

An absolute Imbalance of the Marine Ecosystems: Overfishing has a very detrimental effect on marine ecosystems. The situation can be so bad that the fish might not be able to sustain themselves any longer. Also, when a particular species of fish is caught repeatedly and in an unchecked manner, the food chain of the waterbody is affected too. As a result of that, many other species of fishes dependent on that one particular species suffers due to the lack of food and dies.

Rise of the Endangered Species: With the rise of the targeted species, another category of species grows too. These are the untargeted species that soon turn into endangered species. This happens because of the prevailing ecological imbalance and also because proper efforts are not put in place to increase the population in a waterbody.

The effects of overfishing are vast, and many of them won’t be known until they are actually negatively impacting human life on the planet. Some of the potential solutions to stop overfishing are discussed below:

Currently less than 2% of the world’s ocean are protected in marine parks and less than 1% are protected from any kind of fishing. More no-fishing zones should be created to allow the fish populations to recover and replenish themselves and ensure fishing for future generations.

Trawling drags huge nets through the ocean that scoops out every animal and the ecosystem in its pathway, resulting in massive wasteful by-catch and the dead fishes are thrown back into the ocean as they were not the targets. Trawling needs to be banned outright as we don’t have that kind of sea life to waste.

Many governments subsidize the fishing industry with subsidies, in an effort to keep the industry thriving. The problem with this is that it incentivizes fishermen to continue to expand, which means that subsidies only end up contributing to the problem of overfishing. Hence governments should reform the fishing industries with certain rules and monitoring systems as well as reduce the subsidies given to them.

When done correctly, farming fish can lead to a sustainable way of providing food and resources to the global population. So far, this practice has seen success with species of fish that are prone to overfishing, such as arctic char and bass.

Catch share is a system of fishing management that is proven to allow the fish stock to replenish while saving the livelihood of the fishing communities. A total allowable catch is established, using scientific data about the health of the fish stocks and the environment in a certain area, and catch shares are licensed out to each fishing business telling exactly how much of each seafood species they are allowed to catch. Using catch share makes seafood more valuable, meaning a higher profit for the fisherman while protecting the environment.

We can make smarter food choices by choosing to eat more sustainable seafood. Avoid big fish which have been overfished for years, like marlin tuna and shark, and eat small fish instead. It is saddening to know that 90% of the big fish are gone. The big fish are important for our ecosystem and are also full of toxic substances from the ocean pollution which makes them unsafe to eat.

Groups are also trying to target consumers to be more aware of the seafood they buy and eat. There are pamphlets and handy guides that help educate consumers about which fish are endangered due to overfishing, and which areas of the world the fish come from. Many of these, such as the one from the Monterey Bay Aquarium, offer choices of fish that aren’t as in danger.

The retailers are for sure seeking benefits, that is why they pay more for the fisheries that can catch a big amount of fish. Because of the benefits, the retailers often forget that it not only could make the population of fish out of number but also hamper another ecosystem. This is the kind of education that we have to educate retailers.

You can join some campaigns that support the protection of fish and try to reduce the overfishing. If you can’t join such campaigns, you may support some organization. The support that you can give to them can in a form of donations, and promoting the organization toward society.

Image of the Day

Receive the latest updates about the articles under the categories of Environment, Lifestyle and Innovation.

Image of the Day